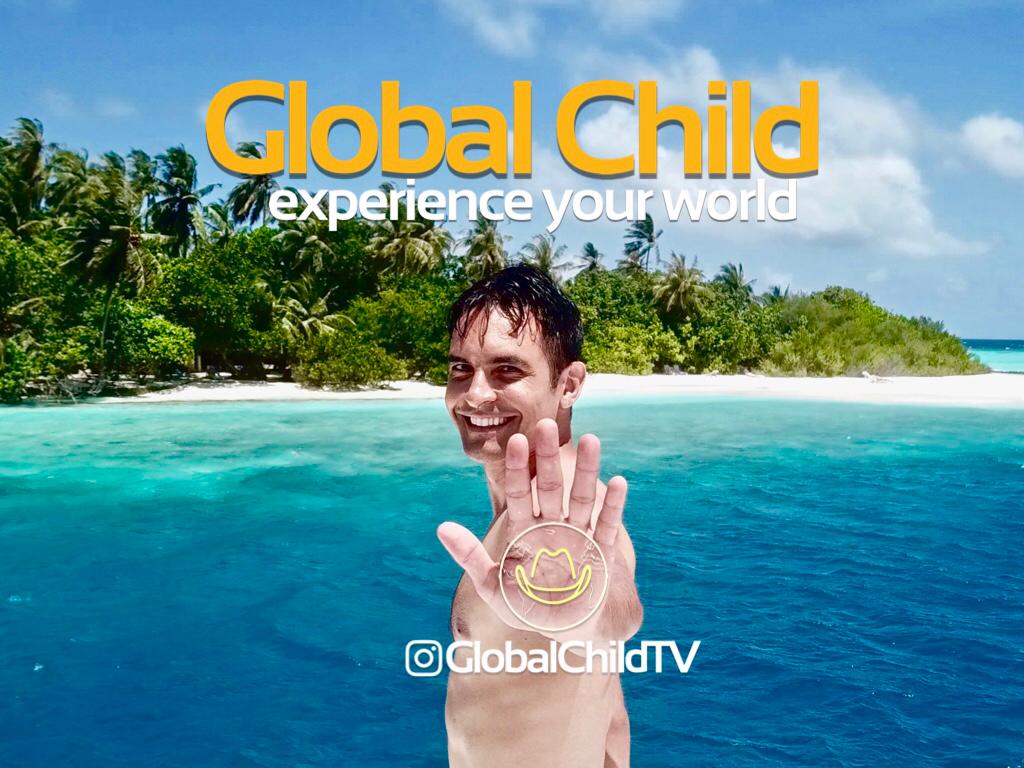 Hi Augusto! Welcome to Mondospettacolo.com, you are best known as the creator of Global Child, I’m really happy to have you here and I would like you to explain to our readers what is it about and how it all began.

Of course! Thank you for having me it’s my pleasure. Global Child is the new generation travel show where we explore the world through the best experiences as we share life lessons I discover along my path! We work with many of the top luxury hotels, adventure companies and actresses, models and celebrities. The show itself began 3 years ago when I set out with a selfie stick, almost no money and a lot of faith to begin to explore the world.

As I went I began to document my experience and even though everyone told me it was impossible a little voice inside me said keep going and we launched on 10 major airlines that carry 300 million passengers around the world! It was a dream come true. Now that we were on the airlines, all the top hotels and travel brands began wanting to collaborate and so the show is growing a lot and we have filmed in 20 countries and with 35 five star hotels. What people don’t know is the story before… I was the number one club promoter in Miami, I had a big life transformation after years of not making smart choices and just partying all the time… I went to a cool modern Christian church in Los Angeles called Mosaic and my life was transformed.

So, in my hardest moment I prayed and then a friend called me Christmas Day and gave me tickets to travel the world almost for free and that is how the show started. So go for your dreams and ask for help form the big guy upstairs He is always listening even if we are not.

So far is there an episode or experience from the show, that have had an impact on you as a person?

Every single one. I think climbing to the top of Kilimanjaro in our Tanzania episode was special because it was the hardest thing I’ve done. In India we stayed at the top luxury hotels but we also visited a leper colony and we now sponsor 65 lepers with food for a year. It is always important to give back and have a purpose for the things that we do. If you want to model or act or have a business that is great…but you have to figure out how you are going to make the world better, if not then we are just part of the problem instead of the solution. You are also a tv host, writer and director, how do you face all these work commitments?

I have learned to have a thing called “sustainability” which is the ability to do something for extended periods of time without burning out. Every Sunday I rest, hang out with my family and friends and go to my cool modern church. Then, during the week I set a schedule and work hard at what I need to do. I love what I do so it’s not work I want to escape, its art that I want to create. That is the secret. Like they say, if you love what you do you don’t work a single day of your life.

Do you like to experience the journey with a local person who actually is a stranger to you? What happens if you don’t get along with someone but still have to film the episode?

The first season I mostly travelled alone and met some people at the places. That was fun. I realized that the best experiences are shared so I began traveling with co-hosts also for the audience. I’m sure I’m entertaining but I wanted to bring a female perspective and essence to each episode. Also its fun because each person brings something unique to the show. Honestly, the great majority of my experiences have been great but some people are definitely more difficult to work with than others.

This is life… part of being a good director is learning how to get the performance you need and also being patient when they’re not being their best because I’m sure I can be hard to work with too at times. I can be a bit demanding and impatient and I need to work on that. Mostly, I’d say 99% of them are even better friends of mine and we look back on the experience with great joy! Only one time was it really very hard and in that case well we just cut that part of the trip short and I still had a great time and did most of the filming myself! So it all works out. And lastly I would like to know which are your next “targets”, can we hope for an Italian episode too?

For Season 3 we are thinking of filming in Bali, Puerto Rico, Fiji, South Africa, Spain, Thailand, Miami, Alaska, Colombia, Kenya and of course Italy! For Italy I want to create something special so I’m open to suggestions. Please write them to us on our instagram page @GlobalChildTV and let’s see! I think for now Tuscany, the Amalfi Coast and a bit of Rome. I want to film in different places not the usual places people see. I just have to find the right co host first!